Case Study : Fire Protection Designing as per NFPA for Mall

Fire fighting and fire safety services are of utmost prominence in a building. Especially if the building is a public or commercial complex then the highest priority focus should be given to the fire fighting system in the building.

For a hotel project, we developed 3D coordinated & clash free models for the layout of fire alarms. Fire alarms are one of the components of fire fighting system in the building. The alarms are placed and installed in the project based on the relevant and prescribed fire safety standards.

Our team in the studio thoroughly studied the necessary data provided by the client e.g. detailed architectural drawings, electrical details, mechanical details, and plumbing details, etc. Based on the details received by our team, our team designed the fire alarm network keeping considerations from standards in account, and connecting the network with the main supplies. 3D models were created for the same.

Having 3D coordinated models for fire alarm system enabled the client to install a clash free network on the site that did not obstruct any other service in the building.

Services in the project: 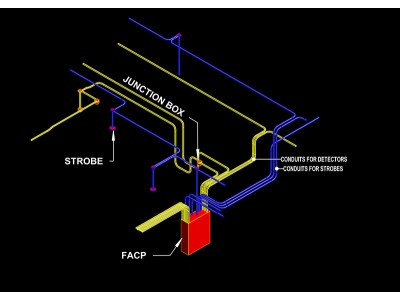