Fire alarm is an element of the fire fighting system. The alarms are connected to the other elements e.g. smoke detectors, fire detectors, etc. For a hotel project, we created 3D models for the fire alarm network, since the network of services is complex. Before creating the models for the same, our team thoroughly studied all the services in the project to strategically place the fire alarms on the norms of NFPA, The National Fire Alarm Code that is established and is widely used in the installation standard.

The final free from clash models were thus created to be issued to client and the execution team of the project. Since the client had the coordinated 3D models of the service, the work on site could be executed with nil chaos and minimal to no clashes.

Services in the project: 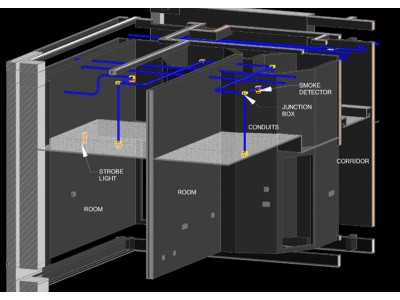